Tag Archives: I Am Chipmunk

Chip Diddy Chip has come a long way in a short space of time and this single will take him even further.

After the success of his Top 10 single Diamond Rings and featuring on DJ Ironik – Tiny Dancer (Which reached Number 3 in the national charts), Chipmunk looks set to add another chart topper to his list with Oopsy Daisy, a far more commercial sounding record, it will no doubt help him gain an even larger fanbase. The song, which is evidently aimed at his growing female audience, whilst being relative for his male fans, is mellow and soulful, it has feeling, the female’s vocals take a strong lead, more than in his previous single, not to be seen as a negative as Chipmunk’s verses have presence and really portrays a more humble and sensetive side to Chipmunk, this adds emotion and will help it stand out among other releases.

Taken from his debut album I AM Chipmunk (to be released in October), Oopsy Daisy is a light-hearted and touching track, one that will appeal to many people (not just his own fanbase), it actually is such a warm and heartfelt track that you cannot critisize it as the formula works really well, Chipmunk’s lyrics are youthfully relevant and really holds the song together well. A number one record for Chipmunk has always been expected, Oopsy Daisy might just be his first. 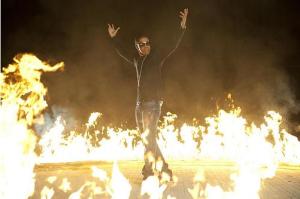 Chipmunk Is Fired Up To Top The Charts

UK’s own Mr Munk, better known as Chipmunk has announced that he has signed to major label Sony (Columbia) records.

The move has come whilst much anticipation for the release of his debut ‘I Am Chipmunk‘ continues, the Mobo Award winner has been risen from a little known emcee to one of the urban scenes (if not the country’s) biggest charting prospect, having already gained an overseas fanbase with releases such as Muhammad Ali, Beast (featuring Loick Essien) and Chip Diddy Chip, as well as reaching Number 3 in the charts with DJ Ironik on their Elton John collaboration ‘Tiny Dancer’.

Congratulations to Chipmunk himself and Always Recording who are now the second to reach major label status after Number 1 charting Tinchy Stryder inked his Star In The Hood imprint with Universal records.

The urban scene is rising and it is amazing to see, I can only see it rising further and look forward to seeing more success for our talent in the near future.

Chipmunk after winning 'Best Newcomer' at the Mobo Awards